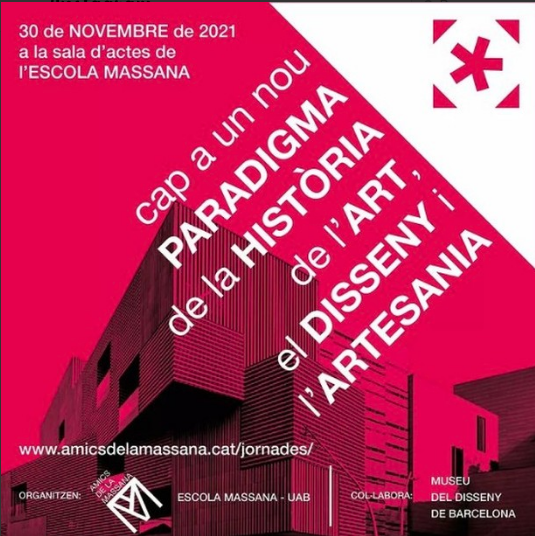 Day of reflection and proposals on a non-hierarchical, interdisciplinary and transversal history of objects, images and spaces.

On November 30, 2021, the first day towards a new paradigm of art, design and crafts was held at the Massana School.

In the Conference for reflection and proposals on a history of objects, images and spaces are not hierarchical, interdisciplinary and transversal. Gabriela Vanzettiparticipated with the presentation “Textile memory” a short journey through the textile arts through time, her encounters and her legacies in contemporary creations.

Below is a summary of the presentation.

“O per honore o per commodo mio” (Either for honor or for my convenience), Ercole de Gonzaga wrote to Bernardino Pia in 1558 requesting the purchase of tapestries for his palace in Rome. His intention to add the best silks and tapestries to his heritage is an example of the use of textiles as a symbol of prestige and social recognition of the time.

For centuries, a variety of fabrics such as: damask, silk, brocade, velvet, satin and wool, were in charge of showing the honor of the house.

According to Christina Antenhofer, the Gonzaga court (1328-1708) as a case study in the purchase and display of luxury textiles, is very interesting because it serves as a model for how to adopt “an aggressive art patronage strategy to push the family to the highest ranks of the European aristocracy “

In the 16th century, the cloth trade was one of the most important sectors of the economy. The commercial relations between Europe and Asia and the encounter with the empires of America offered great value to textiles.

Textiles were easy to transport and soon became the main commodity of exchange in long-distance trade. Land routes between the Far East and the West began about a century before the Christian era, connecting China, Japan, Central Asia, India, the Middle East, and all of Europe.

The nobility and the church give a clear example of how textiles are means of social interaction and political communication. The tapestries were an expensive equivalent to fresco. The elaboration required skilled labor and expensive materials, the style was dictated by the tastes and requirements of the patrons.

The Gonzagas knew how to use textiles in the most varied ceremonies: such as weddings, births, funerals, coronations. But it is not exclusive to this court, it is a use extended to all civilizations, to demonstrate status, identity, the social role of each member through textiles.

In the case of the tapestry, its importance has been emblematic, for example between 1516 and 1530 it was a period of euphoria thanks to the reproduction of several series painted by Raphael and his students (the cartoons of Rafael Sanzio). But from the 19th century on, the few existing workshops were devoted almost entirely to the manufacture of upholstery rugs.

In more recent times interest in tapestries resurfaces thanks to the Arts and Crafts Movement and the Lausanne Tapestry Biennale in Switzerland. Along with carpet weaving and embroidery, tapestry was one of the textile crafts that caught the attention of many artists in the late 1870s.

Since the time of Ercole Gonzaga, tastes, lifestyles, and demand for tapestries have changed. The art of the tapestry has been significantly transformed, the contemporary style replaced the pictorial cartonicism with proposals in which forms, materials, techniques, volumes and textures are put into play. Once the tapestry was detached from the wall, it conquered space and movement. New tapestry, new paradigm.

It is a territory of vast deserts and with a rich and beautiful textile tradition, although few pieces have survived before the 19th century. Most of the pieces that have survived were made by the sedentary population of large cities and trading centers such as Bukhara, Tashkent and Samarkand.

Some time before Ercole de Gonzaga sought honor or convenience with textiles, most Central Asian inhabitants followed a nomadic way of life, traveling with horses, camels, and flocks of sheep and goats from one meadow to another.

Of the textiles made in a traditional way, embroidered fabrics are still created, called suzani, which were formerly part of the bridal trousseau. The suzani, varied in size according to the function and were used as covers, bedspreads, decorative tapestries, prayer mats and shrouds.

The cotton cloth used for embroidery was woven on narrow household looms, and several fabrics had to be sewn together to form a piece of the desired size; silk was occasionally used. It is a collective, community work. Someone from the family or community drew the floral signs on the fabric and then separated by widths that would be embroidered by several women.

Thus, according to its origin, the Istaravshan suzani has large round flowers of many colors. The Samarkand suzani features rich ancient ornaments, embroidered mainly with silk threads. The Bukhara suzani is characterized by its unusual color combination (mix of gray and blue, purple and violet, light yellow and orange threads), and the Kulob and Shahritus suzani largely includes both floral and geometric ornaments that are distributed with great accuracy (enverodeco.es)

Textiles begin to deteriorate from the moment they are manufactured. When most textiles in a society are functional, not many generations survive. The survival of the suzani in a territory with so much movement, intervention and changes may be due to the fact that it is a technique that is easily transported and that requires light materials. Narrow household looms, threads and needles and the main thing is the knowledge of the technique and the power of collective creation. The transfer from one generation to another has been essential, the techniques and iconography are taught and learned through the senses and memory.

While the Gonzaga court took care of their artistic patrimony, already in the textile works the Incas took care to reflect the character of the society dominated by order and hierarchy; and in Mesoamerica women were in charge of creating the Huilpil, a blouse or cotton dress of natural color without dyeing, embroidered with various motifs, including birds and flowers.

It is considered that the Mayas and Incas led in the region the creation of their own textile language, favoring different techniques and also gave great value to iconography, creating drawings and pictorial rhythms in which a kind of mythological and ritual symbols and anthropomorphic representations are manifested. and of animals.

Many of the textiles were intricately stamped on the backstrap loom, these hold the warp tight by the weight of the body itself. The backstrap loom is an inexpensive and easily transportable means, it has survived for millennia of human history, it has been and is capable of producing a great variety of fabrics.

In many images it is usual to find a woman with a backstrap loom. Like the spindles, which have been found in many tombs, they were the symbol of female labor and were placed next to the woman when she died.

In general terms, textiles occupied a privileged position in the various American cultures, they had great economic value as well as a social function, their quality being a sign of the rank of the person who wore them.

As with the environment of Ercole de Gonzaga, textiles in America had a sacred character present in religious ceremonies and other celebrations of worship, such as: births, initiation rites, marriages and graves.

Dyeing techniques occupy an important place in the decoration of African fabrics.

The material used to make textiles varies in the different regions according to local resources: cotton among the Bambaras; sheep, goat or camel wool on the southeastern edge of the Sahara; cane, palm and raffia in other areas …

One of the best-known types of cloth in Africa is the bogolanfini, the so-called clay cloths of Mali. Made by Bamana women north of Bamako, they are decorated with geometric patterns in white on a black background. This work is done on locally woven cotton fabrics.

The paint is made from clay rich in iron salts and certain leaves. The iron oxide in the mud reacts with the tannic acid in the fabric to produce a strong black background pattern. Bogolanfini were traditionally worn by hunters, pregnant or menstruating women, or anyone in danger of losing their blood. They are protective clothing that keeps evil spirits away.

The men weave the plain cotton fabric by hand and the women dye the complex patterns. Each cloth is created through an artistic process of several weeks of painting and washing in various infusions. The recipes and the creation process are passed down from mother to daughter in Bamana society.

Understanding the development of textiles in today’s world goes through connecting with the memory and inheritance of the ancestors. Many techniques have coincided in different parts of the world, some have been forgotten and many others survive.

They talk about textile designers and conceptual crafts. Brand names and creators appear that merge traditional techniques with contemporary technological innovations, collective work no longer leaves as many names in the shadows as happened in the past.

In other areas it is fascinating how science and innovation use textiles, as is the case in biomedical applications. “Surgeons use machine-embroidered textile grafts as a form of ‘scaffolding’ to promote nerve and muscle repair” (Textiles, Current Trends and Traditions, p. 39)

There are fibers with tactile, acoustic and optical properties. Architects, designers and artists also use textiles as a means of protest.

What collection would Ercole Gonzaga make of feminist, anti-colonial and environmental artists? Which use the textile as a means to cause changes in the global vision about a certain discipline.

Textile art is one of the oldest art forms of human civilization. Textiles are a form of non-verbal communication and are a fundamental part of our material culture.

Textiles are a world unto themselves, and the world needs textiles.

The Day of reflection and proposals on a history of objects, images and non-hierarchical, interdisciplinary and transversal spaces were organized by the friends of La Massana and the collaboration of the Barcelona Design Museum.

By continuing to browse the site you are agreeing to our use of cookies.